Our defensive system works with a 4-man backfield. We put an extra man for covering/counter attacking. This gives both wingers less responsability to come up and cover at the same time. Using 10 as a second fullback gives more vision and decision-making for counter attacking. Also the best kicking game in the team. The ideal will be if we have a left-foot 10/15 and a right-foot 10/15 in each side.

The wingers come up after they read the direction of the attack. That gives 3 players in the back everytime (one for box kicks/parallel kicks, one in the middle and one for the cross kicks).

Number 9 works as a sweeper. He will order the breakdown/breakdown captain (he will call to leave and play the next ball or attack the breakdown). He will also work as a relief for first defender if there's need to do that(he always relieves the blindside guard/A role, as there's no need to cover a short kick because there's alrealy a player in the back covering the box/parallel kick). 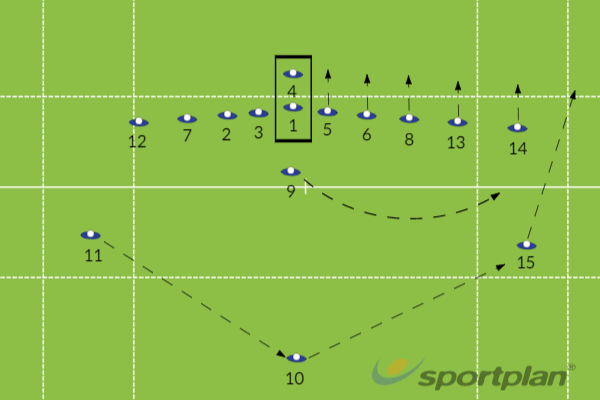