Getting players to understand the process of the maul and the role of each job.

This set up mainly from a lineout.

1. Have a player on a tackle pad to start with.

2. Make sure you have a group of 8 forwards. But also show your backs as well so they understand.

3. Stage 1 - Player who catches ball turns back so its towards defender and holds ball in both hands as far away from defender.

4. Stage 2 - The next two players come in one takes ball and places it on hip in the middle and both latch onto player one.

5. Stage 3 - Fourth player comes in and takes ball with both hands and sits in gap between 2nd and 3rd player.

8. Make sure you build it up stationairy to start with until the get the concept.

- Gradually get them walking through it and slowly increase the speed.

- Slowly add in defense and how to stop a maul.

- Once they have concept of the maul and driving forward bring it into a game set up with 3 people on tackle shields.

- Then get it all involved where the backs make a play off the driving maul if it gets stopped. 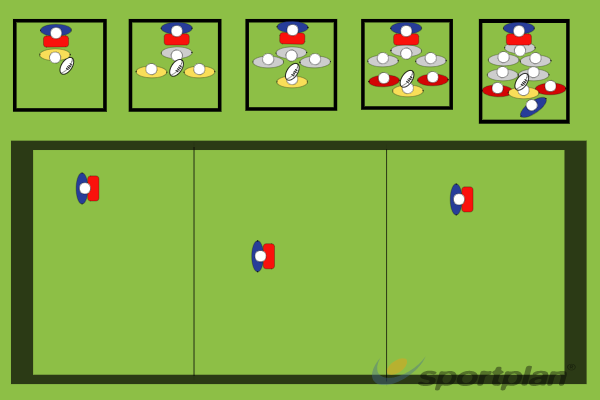