An attack/support practice for U7 upwards

U8 downwards should use tag belts. U9s use grab tackle or 2-hands touch. U10 upwards full tackle allowed.

Use cones to create a channel 20m long by 5m wide

Line the attacking players up in pairs and the defenders individually, at either end of the channel as shown

Each pair of attackers has a ball.

On the coach's call of GO, the first attacker runs across the channel and touches the opposite cone with the ball as shown. Defender MAY NOT MOVE until the ball touches the cone.

After touching the cone, attacker starts up the channel as defender advances to meet him.

First attacker can either pass before contact to team mate, or take the tackle and offload to support arriving at speed.

As players get older, skills like pop pass from the ground, offload around the tackler's back etc come into play. 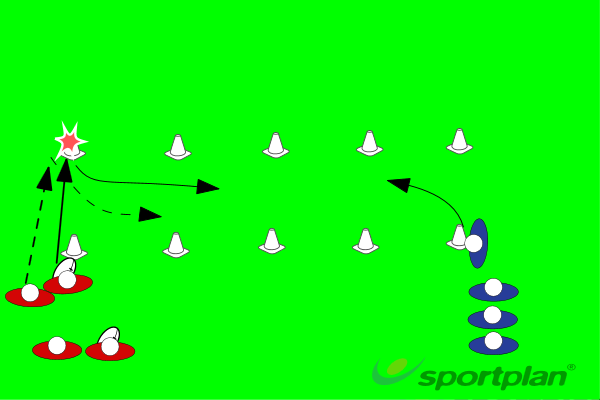