The idea is to isolate the defending fly-half. Using your scrumhalf from a ruck/scrum.

Atackers-
The 12, 13, 14, and 15 all have to run a soft drifting line to entice the defence on a drift to the wing. Attacking 10 will run a hard inside line on the defensive fly-half, making him turn his shoulders. This allows for a gap in between the defensive 10 and 12 for the attacking scrum-half to run through. A simple "loop" move will allow the execution of this run.

If the 12 holds their position, a simple draw and pass from the scrum-half will allow for an overlap on the open side. At the least, you will make some serious yards out of this move.

Lots of room for you to adapt and change the running lines, this is just a basic and simple move to add to your play-book 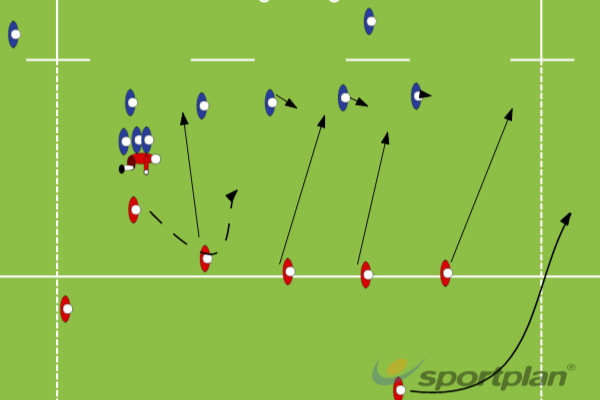