This is a basic 7s defense drill, using a defense line of 6 players and using your remaining player as a sweeper.
Start with a small grid, just big enough to fit 7 players, with room to pass.
Blue (attacking) spread between the cones, while Red (defence) mark up to the first 6 Blue players.
Blue remain standing and pass the ball along the line at a steady pace. As soon as Blue start passing, Red approach at jogging speed towards the player they are marking.  Once the ball reaches the 4th attacker (the yellow player), the red defensive line shifts out one player, so effectively drifting out.  By the time the ball reaches the last attacker, the 6th defender should have him covered. Red jog back into position and the drill starts again.
Sweeper just jogs from side to side, as cover for the chip through or a line break. 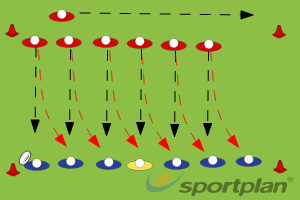 Building Speed Onto The Ball

Building The Defence 2 - TURNOVER THE BALL