Aim: To improve the players individual Head -on Tackle.

Secondary: Scanning the field for the next attack.

and followed by scrum half in Yellow.

3 Supporting blue players set attack of either a pod or an attacking line:

3 supporting red players set as a Guard, Shield, A position, narrow or slightly wider to defend the attack (deefenders need to scan the field for the attack)

4. Next player makes individual tackle on Blue going forward from scrum half pass.

5. Red defence pushes up on inside shoulder to try to win gain line battle.

Repeat for No of phases.

Encourage the attackers to move the ball passed the first reciever to make defenders work.

Attackers can start attacking to one side and then change direction of the attack to force the defence to scan and readjust defence line to either side of the ruck.

Look for defenders watching the players and not looking in towards the ball (scanning the pitch to counter the attack.

Game: If player misses a tackle all 3 run to far side line and start again.

1. Shoulder Contact with the ball carrier on Hip area with head to the near side.

2. Step Into the player prior to hit and Leg Drive into the opponent. No going passive in the tackle, Look to win the contact.

Coaching Look for players being shy of head on contact, encourage the step in and not going onto their heels. 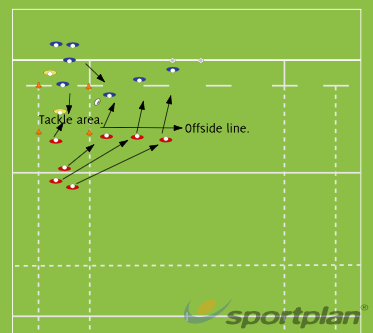 1st man at the ruck

Bounce and compete for ball