Hands,Communication and agility warm up drill.

Players with the ball set out across the grid towards there oppostie player.

Players must call each others name whilst running the drill.

Try and avoid connact with others and build space awareness.

Complete the drill with no dropped balls.

By calling out NUMBERs rather than pop, guts etc, player have to remember which number goes with which drill, which helps with understanding calls and decision making during a game. 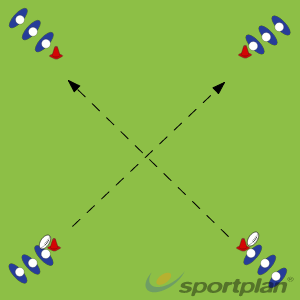