A simple game to encourage running onto the ball and passing in front of the runner.

Split group into two teams of up to eight players. Select one to start as attackers and another to be defenders.

The aim of the game is to score a try past the defence.

Once each person in the attacking team has gone (inclluding the first receiver) defence and attack swap.

Points are scored as follows:

Rotate attack and defence as many times as appropriate.

Encourage the first receiver to pass in front of the runner

Move up together - walk then run

End defender to not let runner on the outside 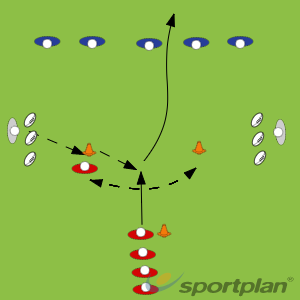