Practice Description
Six attackers and six defenders. The defenders have to two-hand touch the ball carrier to stop the
attack. Once touched, the ball carrier looks to offload to a support player running through.
If the player isn’t able to offload within two seconds they go to ground and present the ball.
Next player goes in and makes clearing pass. If team scores a try, the ball is given to the opposition.
Turnover also occurs for a knock-on or forward pass.

Practice Progression / Regressions
Offloads must be within two metres of tackle. If not, turn ball over to other team.
If offload not made, ball carrier goes to ground and presents the ball. One player from each team
go over top of ball to create ruck. Introduce more than one option in support, i.e. having one
supporter either side and one behind creating a diamond shape.
If ball is not offloaded within two seconds then possession is turned over to the other team.
Progress to tackle, using only 1-on-1 tackles (Refer to tackle key factors LTPD stage 1 FUNdamentals).
If player runs directly into contact the ball is turned over to the other team.
Game Coaching Guidance
Observe footwork in contact, making sure players attack spaces, commenting on success if players
hit a gap. Regularly switch players between attack and defence and maintain a good level of
activity. Watch support players following ball players into contact. If the offload does not occur,
what do they do? (get in position to ruck etc).
Coach should highlight when a good offload occurs, asking players what caused the success. 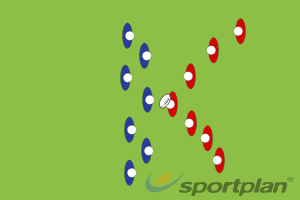 Attack until youre tackled

Fend off the challenge

Offloading Around The Back

Offloading Behind the Defender

Offloading Off The Floor

Offloading Out The Back