An individual defence skills game for U6 upwards

Kids love the gladiatorial nature of this contest, especially when they get to 'real' tackling

Use cones to create a channel 20m long by 5m wide

On the coach's call of GO, the first pair runs round opposite ends of the channel as shown

The first player to the ball picks it up and tries to score at the far end of the channel, while his partner tries to stop him with a TAG or tackle.

Make the channel narrower to aid the defender or wider to challenge him.

Coach can roll the ball to one end or the other as the players enter the channel. 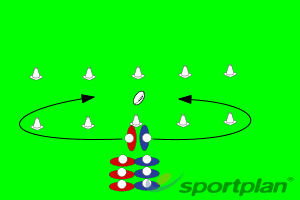