- After a touch, Attacking team places the ball on the floor and FULL attacking team must retreat, touch try line, then turn and play

- Defensive team pick up the ball and attack immediately, until a score or another touch.

- If a team score, ball is left on the try line and FULL attacking team retreats to try line. Defending team plays immediately from try line.

- Game is played in bursts of 1-2 minutes dependant on fitness level, desired outcomes (it is a very physically taxing game)

- Good game for getting players very active, as all players are constantly moving

- Attacking focus, encouraging players to go forward as they attack. Players are trying to beat defenders back to their try line and score without a touch.

-  If this is not an option, then attacking team is trying to move the ball as the defence turns formt he try line

- Attackers want to read the direction the Defenders hips are facing, and pass the ball towards their back so they cannot defend.

- Try to isolate a player on the win, so that we can create 2 v 1 scenarios and give players a chance to read defenders body shapes 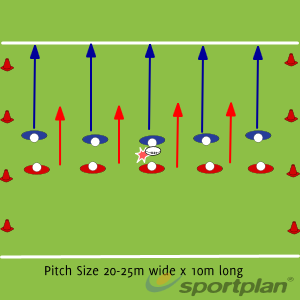