Set up an 8vs8 or more if you have them,on the touchline facing away from pitch.

The drill starts when the coach taps his chosen player on the shoulder with the ball.That player then turns and runs onto pitch and goes to ground in an attacking position. Shortly after the player runs with the ball the coach blows his whistle and all players turn and run onto pitch and take up their relevant attacking or defensive lines,depending on whether they have possesion or not.

The coach counts down from 5 and on his command the game then starts...untill a try is scored or there is an infringement.

Take it in turns for each team to defend attack,or better still mix it up.

Ensure various positions are used on the pitch to test players ability to set defence and attacking lines.

Attack...ensure players are deep and running onto the ball

In attack this could also be used for a set piece move.

Without each team realising coach could hold either a defender or an attacker on the touchline so there is a mismatch...see if the opposing teams notice and capitilise.. 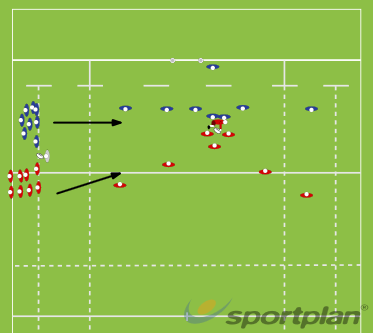