A ruck is called and A set up an attack from that number, with D setting up their defence from the same ruck.

Play continues until a try is scored, or D force a mistake or tunrover

Once one of these things happen, D becomes A, and the team that was resting becomes the new D

Keep rotating teams for a set amount of time

First thing D does is set A B C then fan from there.

Next, generate line speed and see if we can get a double tackle, preferably Chop with D2 in over the ball and in the space

Defending team becomes Attack so that they are fatigued, hopefully helping the new defence who have just rested 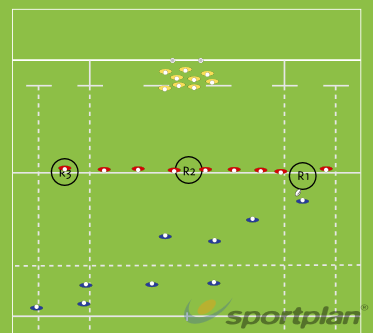