Using half a pitch or similar.

Ask for 2 volunteers 2 be 'Bulldogs'.

All other players have a ball each and start at one end of the pitch which is a 'safe zone' where they can't be tackled.

Bulldogs stand in the middle of the pitch.

When the game starts, players attempt to dribble to the opposite side 'safe zone' without the Bulldogs getting a touch on their ball.

Repeat until all dribbling players have been made into Bulldogs.

Encourage players to maximise their vision whilst dribbling (try not to look down at the ball/ground) in order to identify areas of space to dribble into and use a change of pace to exploit these areas.

If a dribbling player has to engage a Bulldog they should use appropriate skills to prevent their opponent touching the ball. For example consider how they can get their body between opponent and ball to prevent them from reaching it easily.

Encourage Bulldogs to defend in small groups rather than as individuals.

Make sure everyone keeps moving as much as possible - it is a warm up! 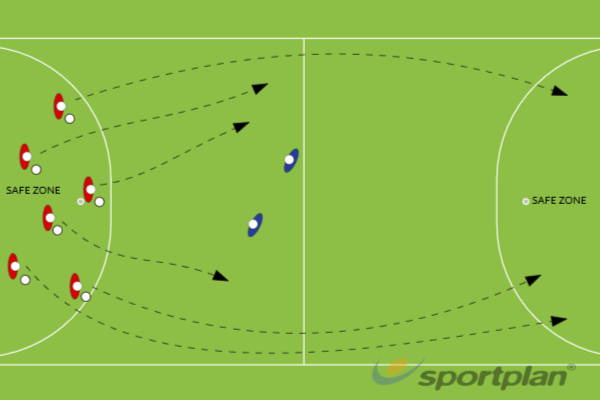 Small Unit Play: All in the Grid

warm up drills with gates

Warm up exercise for vision and talking