Do this first with the coach as a 'ghost' defender (red) ie. putting some pressure but not stopping the ball. Defender should start at the top of the D, and must stay in the box.

Right attacker passes the ball to left attacker, then makes a run behind the defender, showing where they want the ball (red cone). Receive and shoot with 2/3 touches from top of the D.

1) Reverse the drill so the ball starts with the left attacker, pass to the right attacker and make the leading run to the yellow cone. Receive on the reverse and shoot. This is actually easier for setting up a forehand shot.

2) Add a player as a defender - 5 tries and switch. See which defender can make the most number of safe tackles and clear the ball. Alternate between ball starting on the left/right.

Player making the lead run should communicate with voice and body/stick. Player passing the ball should try and engage the defender, look up before passing, and try and disguise the pass where possible.

If the defender follows the player without the ball, then the ball carrier can dribble & shoot themselves. 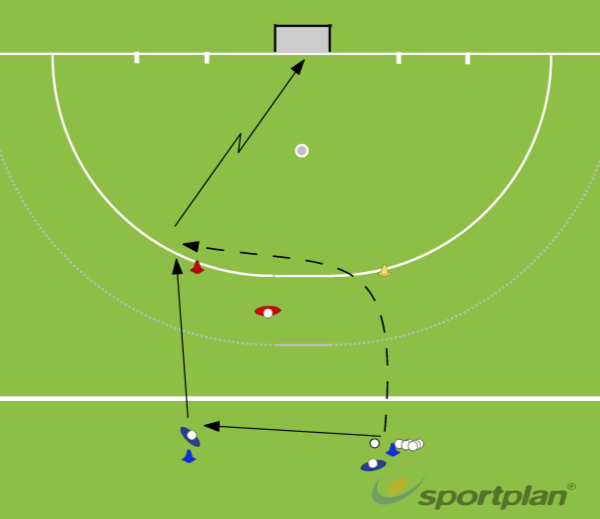 Posting Up - lead and turn

Use footwork to create space (reverse)

Use footwork to create space