Red are defenders and blue attackers.

Red number one gives the ball to blue and runs to put pressure (active but without tackling the ball). Blue gives a push pass to the inside for blue (2), who is acting as a midfielder and following the action and a lead towards the ball. Receives under pressure of red (2) and turns around the white cones to give a flat pass to blue(3) who does the hook and recive to face the 1vs1 against red(3) and hit on goal.

Red(1): Important to give a good pass and go to put pressure. Jap is the most important as not getting too close to the blue(1) as could dribble you easily or make a fault.

Blue(1): Important the pick up and coordination with the first step and ball position. Protect the ball with the body and carry the ball 45 degrees in front of your right foot. Good passing as important as the rest (because if not we loose the ball during the game).

Blue(2): Move slowly to the left (following the action) and then accelerate and pick up the ball (closed reception). Turn to your left protecting the ball with your left foot and when there's time play a flat pass to blue(3).

Red(2): Put pressure on the pick up and then keep next to him with your backhand (one left-hand defence) in order to keep pressing.

Don't run in a straight line. Move the defender and avoid getting too close to him. Fake going to your left and then quick dribble to your right+speed (go through his backhand).

Defend outside the circle. Go to put pressure on the ball but keep the distance. Foot work and always one in front of the other to do the jap. Try to channel to your forehand and then get close and tackle with the two hands. 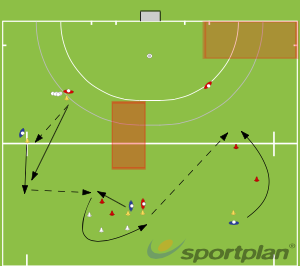