3 defenders will start at their first base positons at the green conesbehind the 3m line. There will be 3 front court players; 2 attackers at either ends of the net and a setter/feeder in the middle of the front court.

When the ball is set to one of the attackers, the 3 defenders must move to their defensive base position, indicated by the cones. If the ball is set to the red attacker, they must move to the red cones, likewise with the blue attacker. They must defend the hit by digging the ball, which should be passed back to the setter for them to set again and continue the drill. The drill must be repeated where the setter can set to different attackers each time, and the attackers hitting towards different cones each time.

Defenders should keep their eyes on the ball, and move to their different base positions using a quick side-ways shuffle. Their shoulders should face towards the attacker, then when the ball is hit at them, then they should face the setter so they can direct the ball back into the setter. After each pass defenders must move back to their starting positions before they move again to their defensive positions.

Attackers must ensure they keep their shoulders facing towards the target they are hitting.

Progressions: Players can rotate to find a new position and repeat the drill.

The ball could be hit harder by the attackers.

Cone markers could be removed once players get used to their defensive positions.

Created by Kieran, Volleyball Other, England 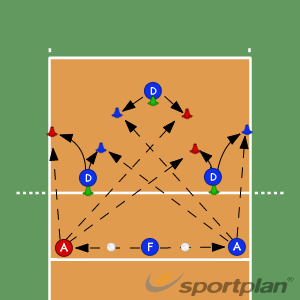