what are simple drills for touch rugby...to get ready?

what are simple drills for touch rugby...to get ready?

what are simple drills for touch rugby...to get ready for the season? 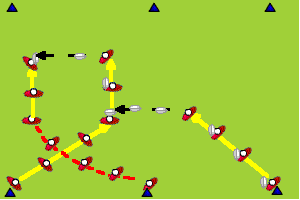 skip pass and outside

skip pass and outside

all you need is to practise plays. kick the ball to them and they have to play thier set. another idea is to practise 2 on 1s. Playing a game at the end is also vital.

how about playing a game of shark? starting of with two sharks depending on the size of group begin with two handed touch progressing to having the seaweed becoming sharks then using a ball and then having a game with the sharks on their knees and the runners on their knees and they can only be caught by tackling this game is just as much fun for the coach as for the kids.hope this can help.

Hi, Maria The best basic drill which is easy to do and easy to adapt and, most importantly, allows you to cover several principles relevant to touch rugby involves simple 10mx10m grids with 2 attackers v 1 defender. From this simple set-iup of 1 ball-carrier with one support player running at 1 defender, you can cover: fixing the defender, making space, timing and delivering the right pass, support calling and coming from depth, the defender moving forward to cut time and space etc. You can also then build from here to develop skills further by varying the delivery of the ball to ball-carrier, chaging the defender's starting position and the attackers' starting positions, adding another grid to provide another defender to be dealt with, making the next grid narrower therefore demanding the support come from depth etc. Make the grid wider to allow for building of 3 v2's . The sky's the limit. Really easy to organise with minimal interruption to the flow of the session.I tried to add a chalboard picture but my technological skills have been emptied. Sorry

Hi Maria, All of the posted answers are useful and have their place in any training session at all levels. If you're like most teams, you probably have one session per week to train followed by a game later in the week.Most of the participants probably have never played before or are of limited ability. Unless you have intensions of winning the next tag rugby world cup with 40 year old Tom from Resources and 48 year old Mary from administration, the most basic principle is how to catch and pass. Hands out and go to the ball rather than waiting for it to come to you. Move the ball across the body and pass as if you were handing to the receiver i.e. follow through. For those that dont have the best hands in the world, bring it into the chest. Its all about coaching to the ability of the participants. They'll soon get disillusioned with 2 V 1s if they cant pass and catch. I was full time for 12 years and there were some pros who couldnt even do 2 V 1 on a consistent basis. Go with 1 V 1 first and get them running at space as hard as they can. Then 2 V 1 and same idea except that when defender comes across to tag, they pass to support player.

For the beginners play 'Captains coming' game. Still call starboard, stern, etc. for direction of running - but instead of climb the rigging, etc use the following... 'Tap' -teaching them how to tap instead of rolling after a try. 'Shout the touch', 'roll the ball', 'reload' - which I use to tell the team to get back to the ref after the touch. You may have your own ones you could add. (Everyone needs a ball for this.) This helps teach some of the basics of Touch Rugby - so when the game is on and you might say it - they will know what you mean.

Paddy you are so right. the issue in todays game at all levels is that players don't know how to run....silly but true