Improving game awareness. How can I improve players?

Improving game awareness. How can I improve players?

How can I improve players insight into "what happens next", besides by whatching (games)? Players tend to be fixed on the ball(situation) and seldom look at what is in front of them%3A how can I stimulated them to take time to quickly look around and assess the situation?

You are quite right that awareness is a difficult skill to coach.

Many coaches have found that an effective method of coaching game awareness in training is to get the players to play small sided games. In this way the coach can create situations where players have to react as they would in a full game.

For example: If you wanted players to be able to react to the defence put against them near the try line, you could condition a game where you have 3 or 4 players attacking the try line on the pitch from 20 metres out.

By staggering the defensive players you could force your attacking players to react deifferently each time until they get proficient at scoring.

I hope this helps you and wish you a Happy New Year!

If I could just offer some thoughts on this, as I think you ask a very valid question.

'Ball watching' is the bane of most teams starting out, we see our sides watch the ball only for the opposition to play a couple of miss moves and work a 1/2/3 man overlap outside.

I completely agree with Simon, small sided games up to 8v8 will assist players, but unlike soccer, where players skillsets are very similar, rugby offers some extra dimensions where the coach needs to work on the situations and break them down for players.

For example if the opposition are planning on a quick wide attack with offloads, then my players (in defence) can influence the attack by making offensive, driving tackles which can cause the opposition support players to overrun the ball carrier and halt play, with a turnover as a 50/50 option.

On the other hand, we may've called a narrow play, but our outside centre notices space open up in front of him and wants to cancel and move wide quick. How do we cater for this?

Its routine against instinct, and I believe it pays to assist players to become instinctive.

Scanning practices are very good for improving players instincts for the game, to keep players looking at what is happening in front of them and notice that split second opportunity for them to take advantage of. You can provide scanning practices for almost any play. the main thing is they have the ability to stop the players 'ball watching'.

I would like to provide some of the scanning practices on this site, and some coaches have shown interest in them. Not sure that getting them around to people via a question is best way. 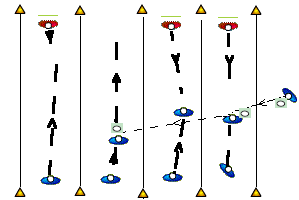 Attack (blue) stand with back to defence. Defenders take up position leaving one channel vacant. On call from SH in right channel, all attckers turn to attack the channels. Purpose is for the outside attackers to scan and identify the vacant channel, then communicate this to the 1st receiver.

Attack (blue) stand with back to defence. Defenders take up position leaving one channel vacant. On call from SH in right channel, all attckers turn to attack the channels. Purpose is for the outside attackers to scan and identify the vacant channel, then communicate this to the 1st receiver.
Login or Join Now for FREE to post your answer