How do you keep your team motivated - drill ideas?

How do you keep your team motivated - drill ideas?

we started the season 5-1 and now mid-way it seems we are fading? we have lost our last 3 games - what are some good drills to get them focused again and pumped for the rest of the season and to get them over the hump -to the next level. thanks

Brenda, how are the matches going? Is it just bad luck, leaky defence, 70% possession but cant finish or is it breaking up in midfield, being countered against, lack of channeling etc...?

Beside of how you lost you lost those 3 games , as Rob asked, is to stay positieve and keep focusing on the development of the players. stick to you game plan.

let your players know and something I sometimes to is to ask them what they thought they did good after a lost game. remind them that they also did good things in a game. This give players confidence, which you need to get back in the winning streak.

Victor, Brenda was asking for drills, she can't turn upto a session talk about the game and hope everything will be better. It is my belief that in order to improve you must first identify what area to improve on. Dont just coach for coachings sake. I do agree with the rest of your post though about asking questions in addition to what I put.

Brenda If you could give me some more information on your thoughts of why you think your team lost those 3 games, I will sent you some drills and ideas.

Rob next time don't criticise somebody that is just like you trying to help somebody.

Hi Folks, Coach Paul here in South Africa, before we can get goals, it does not help if we have a leaky defence. As a coach, I go 1-on-1 with my 1st team, while we training I get into their heads and tell them what I expect from them.

I inherited a team, signed a contract on a team unseen and never played hockey before, I took this team with a losing streak, where 1 team's goalkeeper walked off once they were 10-nil ahead. I had inherited the LOSERS. In house fighting, low attendance.

Once I showed them I can coach, have a passion for them and am their protector, I nulified any negativity, even match postmortems, never happens, they expand on issues that were only small concerns.

No with coaching and drills, generally I specialise in match strategy, they have no match reading intuition, so I needed to be the game changer.

My favourite drill with variations. Never have forwards bearing down on backs, the team needs to be a unit, therefore backs must be encourage to do the runs with the forwards and links, as a unit they work. In 6 months of training, I never had my forwards against backs. What I did do is get some boys to come be defenders and we then attacked against them, in unisome.

I put car tyres in the normal paths of atack and players had to collect and intercept before the ball hit the tyres.

The kids feed off my enthusiasm.

My team is now ranked 39th nationally, make training fun, show you have a plan and tap into them. Most important, don't give up on them in the middle of a game.

As a newbie to hockey, I found this forum a huge success and the game plans inside are awesome. I needed nothing more, go through the drills already here and add variations, each coach has his unique qualities and the way he does drills etc.

First find your strength, then go forth.

thanks for all of the advice. it was all helpful. our breakdown is between mid field and front line. we have been working really hard and they have come a long way. from not winning any games to at least 5 so far this year.

Victor, i apologise if what i wrote came across as criticism. It wasn't intended that way. I am pleased that brenda has provided more information which is only what I was asking for in the first place - Good Luck brenda, I hope your fortunes change

we are still losing -my offense just cant finish - no one is hungry enough to want to score - still only losing by 1 or 2 but how can I get my offense to score?? any ideas - I have done a lot of shooting drills -but some dont work because we are on grass.

thanks again for all of the comments

Have you tried looking at the formation you use and whether it could be structured to provide more attacking options?

What formation do you currently play?

i just switched to a 1-2-4-4. with the mid 4 playing in a diamond. i seems to be working better - we actually won yesterday and scored 2 times. just not sure what shooting drills I can do.

I notice that there is a session plan this week for attacking and shooting in the circle, which might be a good start.

Otherwise, consider looking at drills for defelctions in the circle and concentrate on getting your wingers/wide forwards to get in and around the baseline of the circle. There are some good drills on here for getting players to attack the circle and about cutting teh ball back from the baseline.

The key is to give your forwards teh knowledge of where they should be in the circle when attacking.

I am not sure how much use this is, but I found a session that I created for deflections and connections in the circle during the summer.

Making Connections in the D

Making Connections in the D

A drill I did for working on rebounds and shooting on Goal. works on grass perfect their the ball will drop dead infront of the Goalie.

all the players have a ball and start outside the circle,

the goale calls out a number, this player steps into the circle and shoots on goal the other 3  leave the ball and running for the rebound. 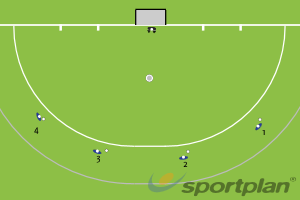 As Victor says, "goalie who gets a lot of balls" would save the goal in crucial times.

Lots of good stuff above, but in case it helps, I would take 3 key approaches - a stated playing style for the team, a system of play to support it, a wholly new skill to contribute to it, one example below, but pick any stretegy and playing principles that you think will suit your side:

1. Focus your side on their positives - if they are tough to score against, motivate them by specifically telling them that you aim to be a side that's tough to beat, rather than a side that wins by scoring more. Underpin this by.....

2. Introduce a new team tactic / strategy that supports this focus. One candidate for the above 'tough to beat' would be using either a 3/4 or half pitch press - bring home to forwards that they are your first line of defence.

3. Bring in a new skill that underpins, for the above one example would be working on your players receiving and controlling a ball hit hard at them whilst running towards it - to mimic when oppositions get frustrated and just try to hit through your press - When they control the ball well, you will be picking up posession moving at speed on teh 25, typically with an overload as well - bonus

All the advice is good.

There is a danger of us coaches thinking we need to 'coach' ourselves out of a situation. Generally speaking this is true.

I have found some players dramatically raise their game after a mental and physical break from hockey.

If your team is Ok with skills, tactics etc... then focus on the psychological.

Try and get back their hunger to win, e.g.

I have found that forwards have delicate egos. When a forward loses their desire to finish, it is a difficult thing to turn around. You cannot tell a forward to finish. They will decide what to chase, whether to shoot or to pass. What makes the situation worse is that their performance (or lack of it) affects how the rest of the team perform, and there is only one of you and all players need your time. For the forwards especially the centre forward, I suggest NOT making a big deal out of it. Be calm with the forwards, let them hit some balls as hard as they wish at goal. Try some simple routines to keep their reactions times fast,e.g. standing on P-spot and fire balls at him/her for first time finishing. 1 to 1's versus keeper etc...

Another, thing is to look at the social groups of the players and also if any sub-groups are forming. This is can be a hidden danger in any team. The hunger needs to be in everyone and united...