How should my team react when opposition uses a full press at 16yd hit?

How should my team react when opposition uses a full press at 16yd hit?

How should a women team,that cannot use the scoup or an overhead,do when the oposit uses a full press at a 16yd hit??Thank you...

Maybe look to find strongest hitter (obvious i know) and blast through the defending wall! Maybe look for back pass to  open up one side for solid hit (if pressing team cover this option then that may open up area in front for a froward pass).

look to ahve your players run to recieve the ball rather than wait for it to come them?

Bring your women down to stand alongside press team and provide tunnels/slots for ball to pass through to next group of your players.

Try the self play option from the free, with fullback running ball to sideline and then hittting it down the wing or preferably to team mate further down field.

look at the attachment , A is the players movment , as the ball carrier move with the ball towards the RW , then in safe distance turn and face his goal , and make pass 1, while he was moving with the ball all the players doing the - A repostioning , after pass 1, then pass 2 , then 3, so you could skip the pressing zone and use on the otherside the support from midfilders

I agree with all the previous posters.

For me though, I look for passing options. This means that:

Hope that helps a bit.

Thank you all for your answers,they were very useful.Most of them use two center backs,but my team uses one because we do not have many problems at defending,plus our sideline defenders are not so skilled that can help offencively.Most of the time we use a formation with 3 defenders,2 players in front of them,3 midfielders and 2 attackers.Any suggestions on what we should do with this formation?Thank you anyway!! 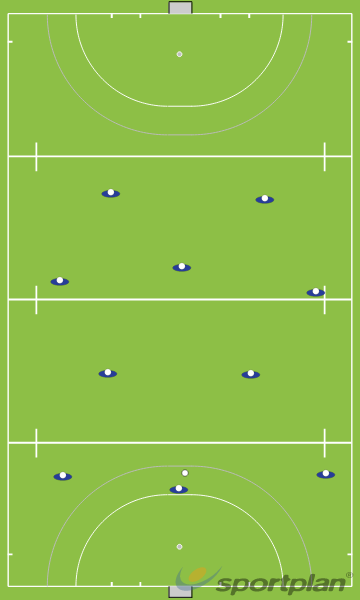 I think the general idea of being able to 'transfer' round the back is EXTREMELY important, so you must think about how you can do this.

Looking at your formation, perhaps you LB or RB could come closer to the CB (depending where the ball is being taken for the 16), with the 1 of the 2 players infront of them dropping and going wide, to temporarily give you 4 at the back?

Also, even though your LB and RB are not so skilled, can they not stop the ball and pass ok? If so, make use of the 2 players infront of your 3 DEFs, to offer the short pass? i.e. they must come deep.

I have a lower skilled side myself and I have spent the entire season getting them to trust each other and move for the short pass - this means they must run more but the short pass should not go wrong so much and successful passing builds confidence. It should also encourage movement off the ball, which is very very important IMHO for building attacking play.

Does that help a bit?

The most obvious solution as Gary says is to take the 16yard hit before the opposition set their press. Make sure your team know they can take the "16yd hit" from any point from the backline to the top of the circle, younger players are not always aware of this option. As the ball leaves the pitch players should already be looking for an opportunity to get the ball in play.

If the ball has to be fetched and there are no ball boys/girls present then the opposition can set their "Press".

No information is given on the shape of the press, this is important as the solutions vary according to the shape. Sometimes teams set a "Deny Press" that cuts the pitch in half (in a line between the goals), keeping the ball on one side or they may set a good old fashioned "W Press" often nowadays with the centre midfield ahead of the two inside forwards (right and left midfield).

In both cases these are psychological as much as tactical problems. Ten general rules%3A-