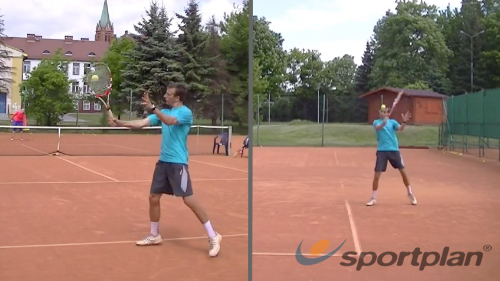 Player stands on the baseline. Coach feeds high topspin ball into the backhand corner. Player tries to hit the ball with backhand slice without moving back.

With less players on the court coach can work with one student while others are performing specific fitness drills or shadowing the high backhand slice to get comfortable with this motion. With more players on the court coach can put one player as a feeder and let him work on this tactical ball at the same time while others are working on responses to this high topspin shot.

Many years ago backhand slice was one of the most common strokes in professional tennis. Steffi Graf was one of the players who proved that you can be really successful while using this backspin shot. Nowadays it is more difficult to successfully play slice shots because of the much higher pace of the game but more limiting factor is the lack of time that coaches spend on teaching and sharpening this skill. Especially on the ATP Tour we can see that top players still execute backspin shots to neutralize the opponent’s balls and the best modern example who is using this classic shot is Roger Federer. Even while dealing with Rafa Nadal high topspin shots to his backhand, Roger is able to take the pace off the ball and force the Spaniard to generate the pace over again.

In this drill players work on dealing with moonballs by using backhand slice shot. During first attempts of this drill players who don’t use slice in their game can struggle a lot because of lack of skills. Backhand slice on its own is a technically demanding shot and adding high point of contact makes it even more difficult. To make this response effective coach has to make sure that players possess basic skills related to the backspin shot. Dealing with moonballs by using backhand slice is a good way to take the pace off and prevent the opponent from hitting the next moonball. Additionally slice gives us an opportunity to hit shorter balls that bounce low so it is impossible for the rival to run forward and hit another moonball from the low point of contact. To properly execute slice off a moonball players have to focus on:

1. Proper stance (Players have to use close stance and they should stand sideways with the right foot in front (for right-handers). This position helps to achieve point of contact in front of the body)

2. Legs involved (Common mistake is to keep the legs straight while hitting around the shoulder level. Bending knees helps to control the ball so coach has to explain to players to keep it low and just rise the racquet higher)

3. Higher preparation (As mentioned in the previous point, legs should be low but racquet has to be high to achieve the best results of a backhand slice)

4. Move it downwards (You don’t want to hit this ball too deep because it creates an opportunity to hit another moonball. Shorter shots will force the opponent to move forward and change strategy so downwards motion of the racquet will have a big impact on the depth of your shot).

The coach stands on one side of the court. Students line up.

The first student hits ball to the coach and then moves to end of the line.

Open The Court With Angle

The coach and player rally together from the advantage side. The player's goal is to open the court with the angle shot.

After a successful rally with the backhand angle, the coach then hits an easy ball to let the player finish with a down the line drive.

Coach stands in front of the player and feeds random balls (Forehand, Backhand, Low, Short, Deep etc). Player has to react and adjust to incoming balls.

SIGN IN WITH EMAIL
or
Tennis
MORE Backhand Drills

Live ball Drill Coach feeds from position 1. Players start off in forehand doubles alley and execute shots with direction. player has to to hit the first ball back to the coach to then hit the second shot down the line.

In this exercise, the coach feeds all the balls to one side. The player's goal is to alternate shots with higher and lower trajectory over the net, firstly hitting a high shot, followed by a low shot, and this is repeated.

The coach stands in front of the player and throws 1 short 1 deep ball to the backhand side. Player's goal is to hit backhands moving inside and outside of the baseline. Proper footwork is crucial if we are thinking about effective tennis play. Many mistakes are made because of improper legs' work so that is why players have to spend more time on drills that are based on intense footwork. Having strong legs and being quick are 2 skills that make us play better as also increase our self-confidence because we know our capabilities.

Player stands on the baseline and prepares to receive the ball. The coach alternates between throwing the ball low and then one high to the player's backhand side. The player must alternate hitting the ball using a backhand stroke after the ball bounces and then with a backhand while the ball is still in the air. 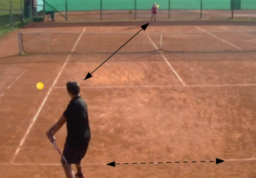 Players rally together. Player A hits 2 backhands cross-court and 1 backhand down the line. Player B responds with all shots to the backhand corner. 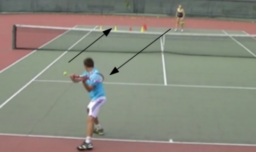 2 responses from backhand side

The player starts by standing behind the doubles alley on the advantage side. The coach feeds regular deep balls to the backhand side, and the player aims to hit the ball down the line in between the doubles alley.

The player stands on the baseline and the coach stands close to the net. The coach feeds drop shot to the backhand side. The player sprints forward and hits deep backhand slice down the line off drop shot.

Approach on the run

Coach stands on the player's side. Coach throws low ball around the service line. Player hits backhand approach shot down the line on the run.

Attacking backhand at the net

Get the player to stand close to the net. The coach then feeds an easy high ball to the player's backhand side. The player then executes an offensive backhand in the air. Note: the player can't touch the net while hitting the ball.

Cones are set on the baseline. The player jumps over the big cone and lands with legs widely apart (flat cones between the legs). The coach feeds the ball to the backhand side, and the player hits backhand stroke.

Players start iff in no mans land. Players approach the backhand, gets into the first volley position (Backhand), then changes to forehand for second volley down the open court

Backhand approach on the run

The coach stands in front of the player, and throws a low ball around the service line. The player sprints forward, hits backhand approach on the run and follows to take position at the net.

Backhand Can Finish The Point

Player moves around the cones as fast as possible and hits backhand cross court.

Old-school slice as a modern weapon

Player stands on the baseline. Coach feeds high topspin ball into the backhand corner. Player tries to hit the ball with backhand slice without moving back. Drill specifications: 1-4 repetitions per set With less players on the court coach can work with one student while others are performing specific fitness drills or shadowing the high backhand slice to get comfortable with this motion. With more players on the court coach can put one player as a feeder and let him work on this tactical ball at the same time while others are working on responses to this high topspin shot.