My daughter plays U13 hockey in the position of right wing.
She gets different advice from her school coach and her club coach.
I want to make sure that she is getting the right advice as she is passionate about her hockey.

Firstly, exactly what is the full function of a right wing at this level of hockey (she will be going to U15 club hockey and U14 school hockey next season)

When her team is in the offensive position in the âDâ she mostly waits at goal post to deflect ball into goal.  She appears to not be involved.  Comments from spectators have been made as to why she just stands there.

There is a very skilled player in her team who hits the ball EXTREMELY hard.  I believe that at this level of hockey these extremely hard hits/passes do not achieve anything, they just keep going out.

However, please can you advise on how to stop and control these very hard passes (that is if one can get to them) in order to move on with the game.

Lastly, can you send some drills/exercises to get her eye in as well as positioning her body correctly for goal shooting.  The âhard hitterâ and my daughter seem to be the main goal shooters of the team.

I coach our womens club which has players from 15 to 40 years old. We score many of our goals from the right or left post position. I find though, to just run to the post and stand still doesnt acheive as much as timing the run to arrive for the deflection. It often means running in and then out , then in again this also means that the defenders cant just stand in a safe place and mark the wing out of the game.

Ideally, the players and coach (hard hitter especially) should talk about this system so the timing of the pass and arrival of the wing is right . Sometimes difficult with younger players but it is a fun excersise at training with initially the coach making the pass so the hard hitter can see what is required to coincide with the arrival of the wing .

I hope this helps
Grant

i use to play hockey at a school, and club level when from ages 10-15.  played mainly with the older girls and sometimes with the boys, so there were a lot of hard hitting players there, and i must say a black eye was something that i sometimes came home with.

to trap anyball, its very important that your stick is positioned correctly to stop it dead, and not allow it to rebound up the stick and into her or anyone elses face.  so make sure her stick head is closer to her body than the top of the stick (which should be angled toward the player she received it from).  its just basic trapping and the more she practices them, the more confident she will be in receiving them.  if she intends to play up, then it is very important she gets use to these types of passes.

i agree with grant about just standing still waiting for a deflection.  doesnt matter what sport you play you should never be stationary when waiting for a ball.

Quite a few questions in total. I coach both senior mens and ladies, at club and county level in Bucks and I'll try to give some answers.

Positioning - I agree with Grant and Lee-annes, never stand still, aim to arrive at the right monent, and if it doesn't come, lead out again for someone to replace you.

Receiving / stopping - the game has moved away from flat stick stopping - we have been for some years coaching players to stop with an upright stick. To help players 'zero-in' on the ball we talk about propreoception (the ability to put your finger on your nose with eyes closed). Which for receiving a hockey ball you aim to line your right foot up with the coming ball, and put the stick in front of the right foot - all of which the body can do with minimal visual input. Once you've learned to position like this naturally, you move the stick further forward in front of the foot to give a stronger playing position.

Key role of the right wing - will depend on what system and formation each side plays, I would expect that your daughters club will play single system, and here the 3 forwards key roles are to provide a high wide passing outlet for defence and midfield, and leading runs to create space for inside forwards to drive into and score.

Most of your questions have been answered above but I just thought I would add my input; when someone is hitting very hard hockey balls at you I found that the best way to trap the ball is to grip using the stance provided above tighter than normal, this will take practise as if you grip too tightly the ball will bounce off your stick so you will need to get your daughter to practise how hard she grips the stick when receiving the ball.

I hope this helps and best of luck to your daughter

The above all good advice but I would add that to get more control over the ball coming from a hard hit (or any hit really) have your daughter drop her right hand down the stick a half to a full hand width. This allows much more strength and control in the trap. Hold the stick angled forward slightly from the top and out in front (ie not in near the body) for better follow-up options.

Agree with all the above comments. "Soft hands" is the ability to trap the ball with out it bouncing too far away from the stick. She may need to shown how to trap the ball by actually taking the stick backwards (direction ball is going) so the ball has a softer landing on the stick and doesn't bounce away from her. Also not sure if you are grass or artificial. If grass then upright stance watching ball onto stick is very sound, if artificial then deflection options become available as well as trapping and hitting. Consider flick or push if she is on post, as this is faster to move ball into goal than have swing and hit.

Ask coach to swap roles with hard hitter (practice or game) so she can get understaindfig of whats needed to pass ball effectivley and give team chance to convert her passes.

Other point is to have her facing the post at 45 degrees angle. this allows her max reach with stick left or right (plus a step if needed) , and allows for deflection in. Means she can watch player coming in and the goalie/defence at same time 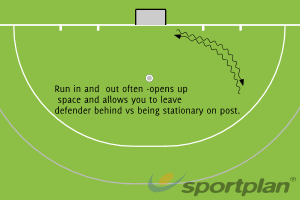