How do i get the right timing for a Jab

How do i get the right timing for a Jab

Skills like the jab are very dynamic and require you to react to the opposition player to get your cue for when to act. The basics are simple, get your lead leg (the side your holding your stick with) forward, get in close enough to reach the ball but keep your stick back so you don`t telegraph that you are within range and watch the ball and the other players stick so you can judge when to poke at the ball. I use this exercise to allow players to practice technique and timing both in carrying the ball and stealing the ball. You just swap it around to goals on the left to work the other side. The Blue player is picking up the ball and trying to score in the red players goal. The red player is trying to stop them by either stealing the ball or just forcing them to go to one of the wider goals. The attacker is not allowed to just shoot, they must cross the line before releasing the ball (we play it up the sideline, the 23 line is our shooting line). The players are allowed to use their imagination to play the exercise, it is about exploring solutions for both of them.

There are some good you-tube vids out there by Mark Knowles explaining technical details of the jab.
I hope this helps
Mick 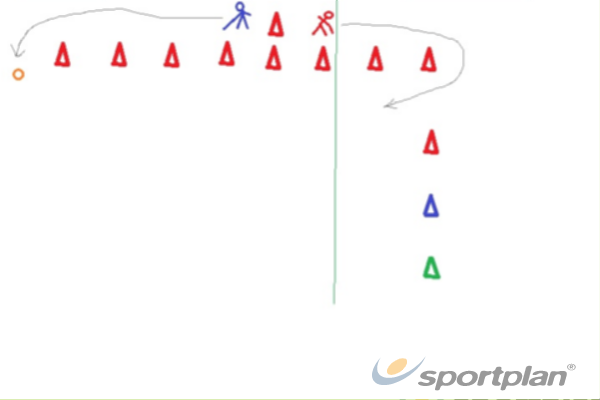 So what is exactly going wrong?

Are you just missing the ball?

Do you go too early or too late?

The way I think of a jab is like a fencing thrust. As far as I`m concerned, you hold your stick in your left hand, then lead with your left foot (though I see no reason why you can`t go with your right foot first too, though you won`t have as much reach) and lunge towards the ball.

Remember that `reaching` with your leg and and arm will give you the most distance but your upper and lower body can work independently of each other i.e. you can let your legs do the running and then `time` your jab.

If you are finding the co-ordination difficult, how about you set up some stationary balls randomly in an area, then literally just try to jab all the balls away as quickly as possible?

To be honest, I don`t use the jab much (and I play in defence typically). It`s all about your body positioning and channelling the the ball carrier to take the longest distance to goal. Ideally, you want to take the ball carrier into restricted space in the pitch (e.g. near the sideline or a corner), where you`ve got the best chance of getting the ball. As a side note, you disrupt play by jabbing the ball away but you don`t typically gain possession, as you`ve knocked the ball away.

Finally, as Mick said, youtube is great for coaching videos. In Australia and NZ, the jab is called the "poke" tackle, Try googling that, if you`re not sure. Hope I`ve helped a bit.