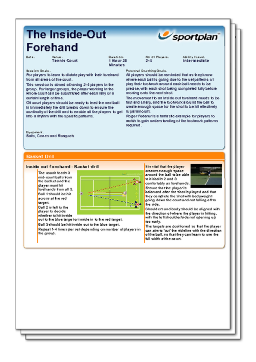 In this technique session we look at the forehand and more specifically how to play the inside-out forehand - a surprisingly powerful and effective stroke!

The inside-out forehand, otherwise known as the 'run around forehand', is a smart way for players for surprise their opponent and strike a killer stroke - either down the line or across court. Quite often players are more confident using their forehand than their backhand. It's clearly important to work on improving the backhand stroke but it's also just as important that your players have a way of turning a weakness into a strength, this is where the inside-out forehand comes in - playing a forehand stroke from the backhand side.

The movement to an inside-out forehand needs to be extremely fast and sharp. Roger Federer is a fantastic example for players to watch to gain understanding of the footwork patterns required.

This session is suited for smaller groups of players although it can easily be adapted when coaching larger groups. The inside-out forehand requires fast feet in order to get around the ball, keeping your balance whilst swinging and then being prepared to run back towards the centre of the court. When playing this advanced forehand players can leave the court very open if they don't recover quickly and return towards the T. However, the benefits of this shot is that it allows your player to play a powerful cross-court forehand onto their opponents backhand or play a stinging down the line stroke.

To start off with you will feed the ball to your players, this will help you to guide them with their first few shots before progressing to a rally based drill. When you set up the next drill you will have players stationed in all parts of the court, working on different strokes. One player at a time will work on the inside-out forehand with the other two players feeding the ball and maintaining the rally. You will also be able to rotate your players' roles in this drill quite frequently, this will allow your players to each have a turn at working on this stroke whilst also learning from their fellow players. 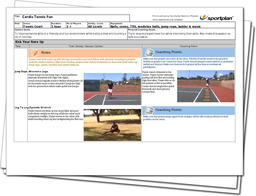 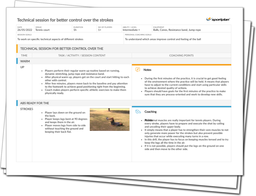 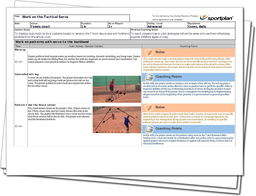