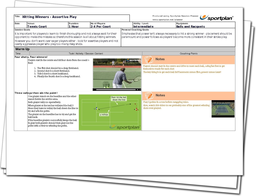 This week's session seizes the game by the scruff of the neck and gets your players to create point winning opportunities rather than waiting for a mistake from their opponent.

There are two mindsets that players can adopt in matches. The first is the consistent mindset, waiting for the right opportunity to hit a winner and the second is the hitting winners mindset, trying to hit winners at every available opportunity, quite often before the time is right to do so.

Having the winning instinct is great, it's what every coach looks for in their players, but it's possible to be over eager so that's where this session comes in - teaching players to be assertive but not overly aggressive!

To get things rolling we open with a patience drill, forcing both players to play three volleys before allowing them to go out and look for the winner! After this we focus on consistency when playing winning shots - how many winners can your players hit in a minute?

You'll probably be shocked that only 10-20% of the shots that professional players play are 'winners'. This means 80-90% percent of the shots are controlled rallying shots, played by both players as they move their opponent around the court, waiting for an error or looking for an opening to hit a winner.