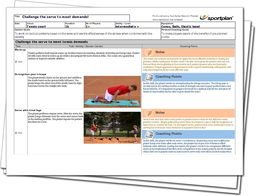 Challenge the serve to meet demands!

This sessions works on your player's tactical awareness, making full use of pre-planned points and tactical patterns so they can reap the benefits on court! By working on anticipating their opponent's shot return to a serve, your player can execute the shot needed to put them on the front foot, giving them the advantage. We also work on your player's fitness, from strength work to helping your players serve consistently, even when tired.

Start off with some fitness drills to work on your player's conditioning, working on areas that will benefit your player's serving motion, helping them to serve consistently. Even when they are tired, it's important that your players can maintain a high serve percentage, so they don't start to lose points on their serve.

We then move onto working on different patterns once the serve has been returned, such cross-court groundstrokes, as well as coming to the net. By getting your players to think tactically, they can get one step ahead of their opponent and dominate the point! It's important to emphasise the effectiveness of the strokes used after the serve, as it could be the difference between victory and falling just short.

Let's get your players on the front foot and serving to the highest level, with this session! 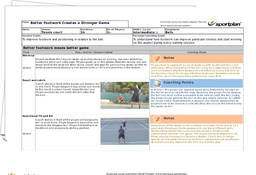 In a match, every ground stroke is played off a different variety of footwork movements. A fine technique is built upon the ability to take an effective position on court to play the stroke. Therefore develop your players reaction times and their footwork with a focus on their technique and tactical positioning. 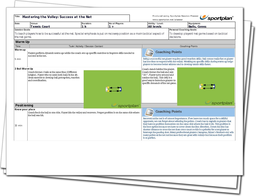 Mastering the Volley: Success at the Net

Volleying is all about positioning and touch. Get your player in the in the right position to make the shot and finish the point and when perfected, it will be a lethal weapon in a players game. 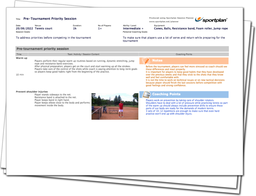