1. Serve-receive patterns are set up on one side of the court, opposite three blockers (red) and a backrow setter (S).

2. The serve-receive team is served and the blockers attempt to stuff-block the opposing attackers (A).

If the block is successful, the blockers remain at the net and another serve is immediately introduced.

If the ball is attacked by the block, the coach (C) immediately tosses a transition pass to the setter.

3. The attackers on the other side attempt to block the counterattack of the blockers, but without digging so that the drill can be controlled.

4. To provide goals for each blocking group, points may be scored.

Transition from block to offense 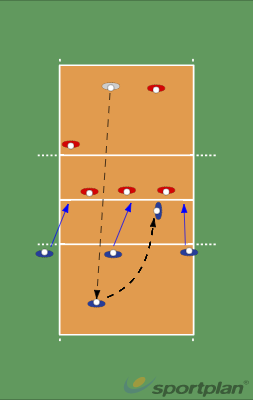 Game on the net