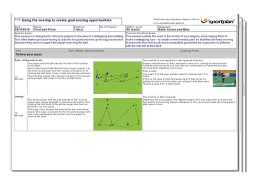 This Session looks at how you can get your players using the overlap to create the extra man and create more goal scoring opportunities!

Running overlaps is reminiscent of the football that was pioneered by Ajax, between 1969-1973, and the Dutch national side, in the 1974 World Cup in West Germany. This style of play operates on the basis that any player can overlap and move taking the position of another one as they move forwards (or backwards).

We're not going quite that far in this week's session but what we are working on is getting players to continue their forward runs after they've played the pass to a team-mate in front of them. There are two things that happens when players do this:

1. The player on the ball has an excellent attacking pass option that they can now use.
2. The run itself will pull defenders out of position and create space for the on the ball player to run into.

Q. Why should I use this session? A. If you find that your team are great at getting the ball forwards but run out of momentum due to a lack of support from running players then this is the session for you!