Attack, 3 players around edge of circle, 1 player hitting it out and others back defending.

Defensively, 4 players & the GK behind the line inside the goal. 2 players in oppositions circle.

Sorcha could play attacker, Hollie can play CM too.

Enjoy, play well and have fun! 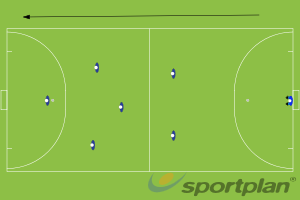 Attacking down the flanks

Pushing the Attack to the side (1v1)

Defending 3vs.2 with Indian Dribble