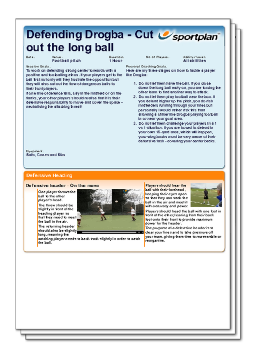 Rating: 5
from 1 members ratings
Log in to view
This Session looks at cutting out balls over the top and being first to the ball in the air - taking the risk out of defending by preventing strong and dangerous attacking players, such as Chelsea's Didier Drogba, from ever getting the ball at their feet with big and decisive defensive headers - getting the ball up high and far away from your team's goal!

Prevention, not cure! - Stop the danger from developing!

Working on these defensive principles this session starts with a simple headering drill, before adding an accuracy element to the exercise - getting players to direct their John-Terry-like clearances to a team-mate higher up the field. Following on from this we get competitive, working with two teams players will have to compete for the ball in the air.

By cutting out the high ball service to the front men not only will you stem the flow of dangerous balls to their front players but you will also frustrate your opponent, forcing them to change their game plan. If the opposition do decide to play with the ball on the ground you can then work on defensive cover, if one player goes to meet the ball one of their team-mates should fill the gap and provide a second line of defence in case the first defender gets beaten by their man.