Attacking team. a back four, 4 across the midfield and 2 stikers one of which is our No 10.

Our attacking shape springs to a 4-2-3-1 with our No 10 linking with our striker. Technically, it developes into a 4-4-2 in the final third.

3. LB plays to LCM whose on the half turn.

4. LM Reacts as the ball travels to LCM and comes inside.

6. LB is already on his way for a third man or overlapping run.

8. Same pattern on right hand side.

9. Starting positions as for players on righthand side of diagram.

2. When the LB passes to LCM he (LB) should be on his aggressive run for the overlap. His timing is important, don't arrive to early.

3. At the same time, the LM has already reacted and comes inside for wall pass with LCM.

4. LCM plays to the LBs overlapping run delivering a cross.

5. The LM then positions himself for a double overlap if it develops.

6. The real key is the pass to the LBs overlapping run. It needs to be a solid aggressive pass thats both on the ground, long and deep offering no chance of a Defender turning to intercept. The LB is also aware that the pass will have pace hence his run being argressive.

7. All passing is two touch football to maintian a high intensity.

CMs join in the attack on the edge of the box for second balls. 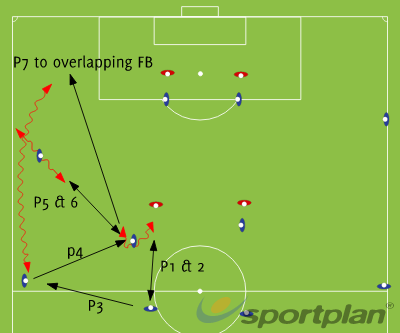