This drill gives players the chance to attack and defend. Attackers must be aware of spaces and surrounding players, alike in a game.

To decrease the intensity, defnders can be removed. To oppose this, increasing intensity can be accomplished by removing attackers, or adding defenders.

This drill can be altered to stand a varying amount of players. Players can also be given a short rest period if there is an abundance of players, as they wait for their next turn. 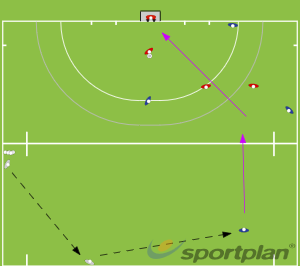 3 v. 2 on the pitch leading to transfer

Copy of Running to wide position

Transfer and 'round behind