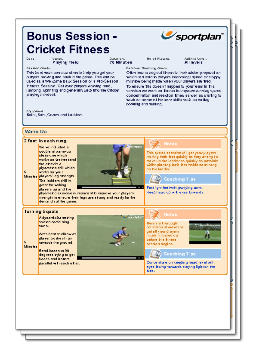 Rating: 4
from 1 members ratings
Log in to view
To help your players have an improved innings and faster fielding this Sportplan Session focuses welcomes your players back to training with this cricket-related fitness levels, to improve their running speed as well as integrating some exercises which work on some of the core skill areas such as batting, bowling and fielding!

Fitness is an area of the game which is quite often overlooked by many coaches. By working on your players' fitness you'll be giving your team a big advantage over the opposition, not only making your players faster but also reducing their chance of injury by giving them stronger muscles.

You'll also be giving your whole team the edge over slower opponents by reducing the likelihood of sloppy mistake occurring in the later stages of long games due to fatigue!

To give your team a cricketing kick start and knock your opponents for six this session starts with some speed and strength warm up ideas before swiftly starting on the serious business of of cricket related fitness!