Required 11 or more players. 4 fielders at Mid Wicket, 4 fielders at Cover, Wicket keeper at the wicket. Two batsman in full kit with bat at either end of the pitch.

1) Coach hits the ball on the ground to Mid On.

2) Batsman starts running for a single crossing and getting to the popping creese as fast as possible sliding in the bat as they are comming in.

3) Feelder at Midwicket recovers the ball and throws at the stumps trying to get the batsman out.

4) After the ball passes the wicket the batsman sets off for a second run.

5) Fielder at Cover Backs up and stops the ball. Fielder then returns the ball to the Wicket keeper, trying to run the batsman out befor he can get in.

Fielder at Midwicket then falls in behind fielder at Cover and Cover fielder runs around the wicket keeper to Midwicket.

This is repeated untill fielders have rotated twice, then change the batsman and start over.

Every successful run taken is a point and every out is minus 1 point for the batsman. Batting pair with the most runs at the end wins.

Use pick up, turn throw thechnique for midwicket fielder. 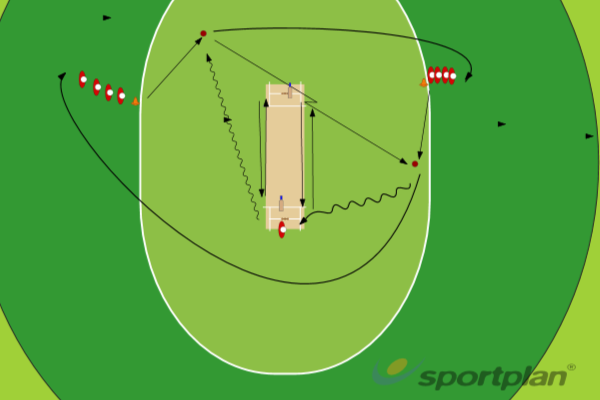 More Running between the wickets Drills

Batter vs 2 handed pick up and throw

Pick up on turn and throw to run out station

Running Between the Wickets - Catchers vs Runners

Running between the wickets relay

Under arm flick run out game

Under arm flick vs batters