Dribbling and Touch - Getting Players to use both feet 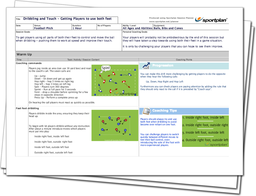 Most players will naturally gravitate to using one foot over the other but it's important to constantly encourage players to use both feet to give them double the options when running with the ball.

It's for that reason that this session gets your players to practice using their other foot to control and dribble the ball. Ambidextrous players, such as Santi Cazorla, are able to kick, pass and shoot with either foot, giving them greater choice when selecting a pass or picking their spot to shoot.

To get your players using all parts of both their feet we push your players to work with the ball at speed. It is only by challenging your players that you can hope to see them improve. Starting with a Simon says style warm up we then get everyone working with a ball at their feet, changing direction and building the skill towards a game situation.

Try to avoid calling it the weak foot, instead use terms like 'non-dominant' or 'other foot' as this moves away from the idea that players should have a strong and a weak side - ideally players should be confident using both feet and remember to give your players plenty of praise and positive reinforcement throughout!