Defensive Confidence in a 1 vs 1 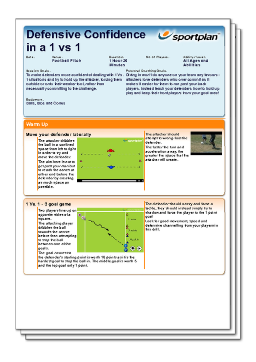 Rating: 5
from 1 members ratings
Log in to view
This Session aims to give your defenders greater confidence when faced with a 1 vs 1 situation, working on shadowing, channelling and most importantly that they don't always have to dive in - just being there will give the attacker far more to worry about!

There's nothing worse than a defender who dives in willy nilly, without thinking about if it's the right thing to do or not. To help prevent this sort of reckless defending in this session we look at ways you can get your players to hold up their man, forcing them wide, away from the danger area, and keeping the attacker away from the danger zones until the cavalry arrives!

It doesn't matter what level of football you coach, whether it's Serie A or Serie Z, defenders always find it difficult when left in a one on one show down.

To deal with these tricky situations we go mano-a-mano, starting with a drill which sees your defenders shadowing their man as they run laterally, standing with knees bent so that they're ready to change direction at any given moment and then progress through a number of increasingly difficult one vs one drills which will test their ability to defend against an oncoming player when it matters the most!