Backing up in the field 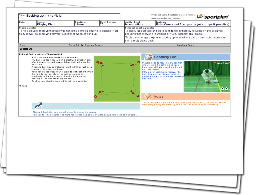 It's great the have a shy at the stumps when a run-out is on, but the risk can be quite high if your team are not on their toes to back-up. This session is a great way of getting up to speed with protecting those over throws!

Whether it?s backing up behind the stumps, or helping your mate out in the the field with a firmly struck shot, this session has got it all covered. It starts off with a basic warm-up to get the players bodies up to speed and their minds switched on. The session then progresses into more strenuous practices which will really require the players to concentrate on their technique when throwing at the stumps as well as being switched on to backing up. Really push your players throughout to pick up and throw as quickly and as accurately as possible to really lump the pressure on the batsmen scampering between the wickets.

What is Backing Up?

As a fielder prepares to catch the ball another fielder, at a further distance, positions themselves behind them, so that if the first fielder misses the ball the damage will be minimal, with the second fielder being able to sweep up behind them.