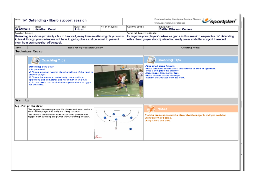 Rating: 4
from 2 members ratings
Log in to view
To improve your players' defensive game this week we're practising 1v1 defending, with a libero player stood just behind ready cover and offer support if needed.

Defending in handball is a physical affair, every time an attacking player wants to break through your back line they'll have to get up close and personal to prevent them from getting a shot on goal. For this reason it's important that your players work on their 1 on 1 skills, both in attack and defence.

Your team should ideally have a second line of defence and this is where the libero player comes into play. Following the movement of the ball around the court and reading the game the libero's role (the free player) is to be in the right place, at the right time, ready to offer support and step in to prevent the opposition's attackers from shooting on goal.

To work on your players' ability to read the game and defend both as a team and as an individual this session opens with a fun and physical warm up before then developing the skill through a series of 1v1, with libero support attacking patterns.