Students in pairs 1 ball between them. Set out the varying distances with lines of cones. Students will need to throw a different way depending on the distance the ball has to cover.

Split the group into teams of 6. One team throwing the ball around posts.

One team running around the posts.

The running team have to run and tag.

Start again when ball and players are back in position again.

Under- arm throw: Opposite foot to throwing hand steps forward. Dominant hand starts behind body and swings below waist. Release as hand points towards target.

What is a technique for underarm throw?

Over arm throw: Stand side on to target.Opposite foot to throwing arm forward. Throwing arm starts behind head, with elbow bent at 45 degree angle- ball held high.As ball is began to be moved forward, hips and shoulders rotate forward too for power.Throwing arm follows through, down and across body.

What is a technique for overarm throw?

Catching below waist- Little fingers together.Cupping shape made with hands. Absorb impact of the ball.

Catching above waist- Thumbs together.Cupping shape made with hands. Absorb impact of the ball. 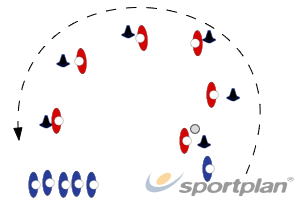 3 ball round the clock

All the Way Across the field

Communication in the Field