2 teams with 2 zones. The idea of the game is for one team (eg. blue team) to be able to pass the ball around and catch the ball in the oppositions goal (red's goal). If this is achieved, then they score a point.

Players to communicate to each other.

Be able to throw and catch the ball effectively with their team mates. Players with the ball have to remain still.

- Progression: Got to pass once to every player. 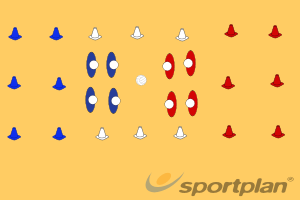 No more than one goal

Score on the mat!

Shoot in the hoop