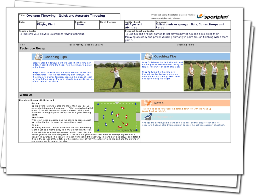 It?s time to get your fielders picking up the ball and firing it back into the bases at ease!

When your opposition is finding the gaps or just clearing it over your fielders, it?s important you get the pressure on them quickly! By improving your fielders overarm throws, you will heap the squeeze onto the batters and they might start to think again about sneaking that extra base.

In this session, we recap the basics of overarm throwing before going on to different modified exercises to put pressure on the throw. Finally, the modified game will force players to put what they have learnt throughout the session into practice.