Movement on and off the ball - Support the Pass! 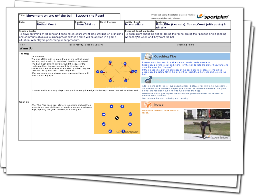 This session develops your players' running, passing and talking - teaching them to time their runs to meet the pass, call when they're ready to receive and move, on and off the ball.

To help players practice timing runs and working on being more vocal on the court we start with a couple of unopposed pass and move drills. Once practised these skills will be applied in a game situation, with players attempting to support their pass, as before, only this time under pressure.

Don't let your team play slow and restricted netball! Move to find space and support the pass, don't let your netball be stuck in the past!

The origins of Netball

Netball's come a long way from since the 1890s when it was played on London lawns and called 'Net ball'. Gone too are the days of long dresses and restricted movement, nowadays netball's a fast-paced and physically demanding sport!

You can find out more about the origins of netball here (opens in a new tab).