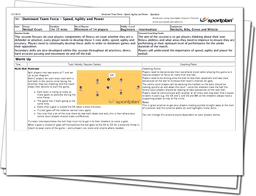 Start improving your team’s fitness and work on the three core skills needed for any match; speed, agility and power. By developing these skills, you’ll create a dominant team, so you can dominate matches and the opposition!

Also work on the secondary skills required for Netball, such as accurate passing and movement off the ball, to put your team in good stead for future matches. It’s important that your players understand how essential these skills are to succeed, so let’s get them working hard!

What’s in the Session?

Start off by getting your players warmed up and ready for action, before diving straight in with testing your player’s fitness already, so you and your players can figure out where to improve on. Work on their change of direction at speed with some simple but effective drills, before moving onto a tough circuit, to really get your players working. With 12 different stations for your players to work through - ranging from different passes to speed work - you’ll be able to see their fitness pay off, ending on a fun note with the final conditioned games.

Get your players ready to dominate and outlast the opposition on court!