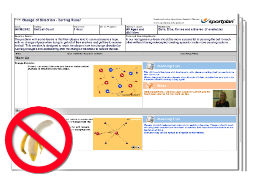 This week's session aims to solve a common banana-shaped problem that is prevalent in many teams.

Banana I hear you ask? Well yes, this is the lackadaisical half moon shaped run that many players make when they want to receive the ball from a fellow team-mate, with no change of pace, no urgency and ultimately no result.

How can I banish these banana-shaped runs?

To help you break through the opposition's defence we look at a well known basketball play which can easily be adopted into your netball repertoire. Using a combination of drills, plays and conditioned games you will be able to teach your players the V-Cut. The V-Cut is a two directional run, requiring a burst of acceleration and a quick change of direction, to ensure there's not a banana in sight!

Use this session today to see your players making more dynamic runs to lose their markers and meet the ball - the other team won't know what's hit them!

Back To Training: Tactics

See how you can use a tactical session to stay safe and improve your teams performance. Split your tactical sessions up into positional work, full team formation and set plays.
read more