We've got our final update in the back to training blog series and this one is all about delivering fun and putting a smile on the players faces with a variety of games.

You don't have to execute these games as 1 session. Some of the ideas below might be good to add in at the end of other sessions.

Similar to what we used in the Pass and Follow session, set-up individual playing squares for the attackers and defenders, as in the example. Attackers have to remain in their squares but the defenders can work together to switch between the free squares. The attacker who loses possession must switch out with a defender.

If you have more players, you can create larger playing groups. Adding more defenders will require them to communicate better to ensure they are not defending in the same square. 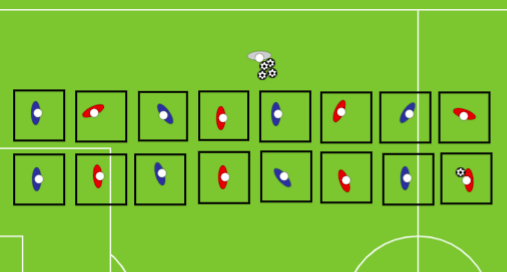 Split your players up into 2 equal teams. Start with the ball at 1 end of the area and the aim of the game is for the teams to transfer the ball to the other end of the pitch to score a goal. The ball must be touched by every player on the team before a goal can be scored. The team with the most goals wins!

This doesn't just have to be in blocks of 2 players. It could work even better if you've got more players to play in blocks of 3 or 4. Also, you can make things interesting by putting rules in place so that passes can only be made with their weaker side or players can only take 2 touches. Failure to comply by the rules results in a turnover!

Split your players up into 2 teams, with 1 team fielding and the other hitting. In this example the fielding team are red and the batting team are blue. The red feeder will play the ball into the blue batter to strike into the outfield.

It is the aim of the blue batter to make it round from bases A to C before the fielding team has retrieved the ball and made consecutive passes from squares 1 to 4. If the fielding team completes the passes before the batter makes it to the final base, the batter is out. The teams switch once the batting team has been out 3 times. You can mix up the rules if completions are being made easily! 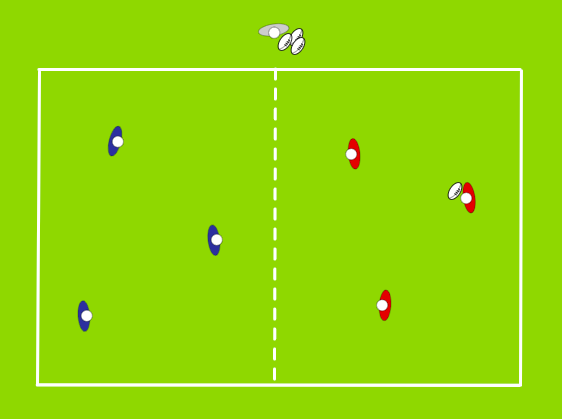 This one might suit certain Sports more than others but you should be able to find an adaptation of it that works for you. For Rugby, the goal is to not let the ball bounce on your side. If you do, the player closest to the bounce must leave the game. The team to run out of players first loses.

The same can be applied to Football. Players must keep the ball in the air when it comes to their side of the court. The player who makes an error is ejected from the game! Depending on the standard of your players you can add in rules like every player must touch the ball before returning or players can only take a maximum of 3 touches. Or you could make it easier by allowing 1 bounce of the ball before returning.


This brings us to the end of our back to training blog series! We hope that you've managed to find some useful information from these over the past few weeks which can help you safely get back into training. Use these tips to keep your training sessions fresh and engaging before training is allowed to return to normal.