Typical Session for the youngest players 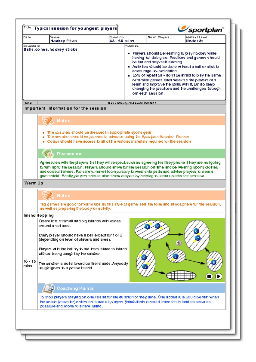 Your young players are beginning to want to be part of small groups and often the most important thing is what the group can or wants to do. If a player has no link to the group the chances are that they will not enjoy the training and will stop playing hockey. It is therefore advisable to pick the groups and teams with the social aspect in mind (friends and school mates together).

Children mainly play on their own or along side others, and this will slowly turn into playing together and when aged 7 they will try to play against each other (which group can do something the best, who wins and who doesn't).

To start with the players are only able to deal with one opponent and later on they will be able to monitor more opponents at the same time.

The feeling of right and wrong is very apt with the young children as they understand simple rules but the important thing is to stick to them, they will be looking out themselves for players breaking the rules. So it is very difficult to be flexible with the rules during games and practices. Their concentration span is very short so they are easily distracted.

Have fun and stay safe!

The training has to be seen as an hour of playing and fun that is best lead by a parent or teacher who understand and are used to dealing with the particular age group.

Coaches should constantly assess during practices that the players walking back or not involved in the practice stand or move well away from the active players. Don't leave equipment lying around that is not being used.