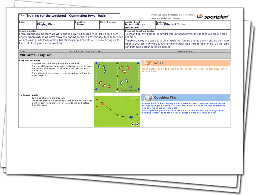 Top coaches will often only use one or two drills for the entire training, stopping play to briefly discuss an area for improvement before resuming the game. It was for this reason that I recently used this session before we were due to play a team who were level with us in the league; so the game could go either way!

From experience this team scored most their goals from short corners (which we gave away too easily) so the logical thing to do was to focus on not fouling, with the intention that players would carry this purpose through with them into their game at the weekend.

To try and get my team to commit fewer unnecessary fouls I used this simple 3 drills session. These practices are specific to playing without fouling and as such it should be made clear to your team why are focusing on this (with their next game in mind) so that they can train with a clear purpose in mind as they prepare to face an opposition who poses a major threat from short corners (it's also great to ensure safe play when returning from a prolonged off season period).

Planning for a purpose - additional info:

Obviously though a team that wants to concentrate on attacking faster in their next game would not want their players to focus on not fouling but the principle remains the same. So what I'm trying to say is the key to the success of your team is to do your research before your next game and the plan your sessions accordingly.

For more information on coaching with a purpose read our free What the top coaches don't tell you> report.