High Speed Elimination PLUS Closing Down to Slow Attacks 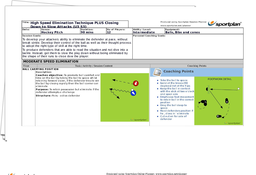 Eliminating at high speed can turn the game on it?s head and will make the difference in tight games. A sharp turn of pace will keep the defenders on their toes and have them worried about diving in to win the ball.

After a full physical warm-up, the session recaps the previous session, developing the skills to eliminate at a moderate speed before progressing to add more pace into the players movements. Develop a healthy skill set of ways the player can eliminate as the session progresses from more basic skills like the ?Chuck and Run? to more advanced skills with quick V-drags and 3D skills.

The reverse part of the session looks at equipping your defenders with the opportunity to practice closing down the attacker to then run with them, rather than approaching to make a tackle and getting eliminated easily. The first part encourages the defender to run with the attacker to keep his eyes down by using the dummy tackle and force them into less-dangerous areas.

The final part of the session uses a modified game to allow each player to get match-specific experience in eliminating and defending to prevent the elimination.