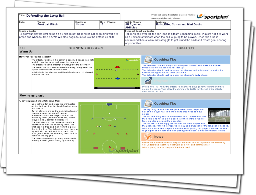 Route one football, also known as hoofing the ball over the top. It's not big and it's not clever but do your team know how to defend against this long-ball style of attack?

Avoid your players being caught out with the ball over the top! This session is designed to get your players defending as a team, recognising when to press and when to drop off. If your team communicates well and moves as a unit, they can ensure they're in a good position to clear the long ball and catch the opposition offside!

To start things off, we begin this simple to set-up session with a defensive slide exercise. This warms your players up while also getting them used to moving side to side. After this we get to work on your defence as we look to develop a 6 man defending unit (4 defenders and 2 central midfielders), that anticipates where the ball is going and moves in unison to neutralise the attacking threat.

Don't let route one football be the downfall of your defence - teach your players to read the signs, anticipate and move to defeat this direct style of play!